The Wild West ain’t no place for the faint-hearted, and Netent’s Dead or Alive Slot is exactly the same. Battle well known outlaws in the Wild West for your share of the bounty!

How to Play Dead or Alive Slot 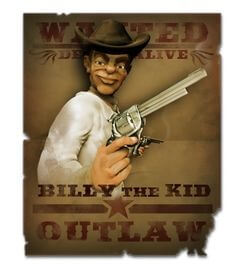 Dead or Alive Slot is from Netent and is set in 19th Century “Wild West”. Design wise, it carries a Western theme complete with a saloon like appearance and a whistling wind / guitar twang soundtrack to boot. And a barking dog, of course.

Dead or Alive Slot Machine is a couple of years old now, but it’s still one of the most popular slots made by Netent, partly due to its classic theme; it never gets old, it’s easy to play and also because it’s a high variance slot – so even more thrilling!

The game features icons on the reels such as an old fashion western Sheriffs badge, and some infamous outlaws who’ve been terrorising towns, including prolific criminals Jesse James and Billy The Kid. Basically, it’s your job to help catch them and get rewarded. Dead or Alive that is.

Dead or Alive Slot is designed with 5 reels, 3 rows and a total of 9 pay lines. Dead or Alive online slots has become a firm favourite for some higher rolling casino players, as it’s known to be a high variance slot. Simply put, you might not see wins often as some other Netent slots, but when you do, they’re on the larger side, so you might need some bank roll to get started with Dead or Alive Slot.

With that said, choose a casino site which offers Netent’s Dead or Alive slot and set the game to your preferred betting limits. Dead or Alive Slot can be played from as little as 9p up to £18. You may also be interested to know that the RTP of Dead or Alive Slot is 96.8% which is slightly above average for Netent Slots.

The great news is that due to the popularity of this game, Netent (finally!) made the Dead or Alive Mobile Slot available in 2016. Yep, we know; it’s quite late in the day but Netent at long last listened to casinos and players alike and you can now play Dead or Alive Slot in mobile format – on smartphones and tablets. We really did rejoice at this news, as before it was only available on Desktop casino sites, which is fine, but not very handy when you feel like playing a gun slinging high variance slot on the go.

Summary – What Do We Think?

This is one of our favourite online slots. Dead or Alive Slot has been out for some time, but we guarantee you that you’ll go back for more on a regular basis. Partly due to the game is simple and easy to play. Also, because there are some hidden gems in there for example, when you land 5 wilds, that’s when the game really heats up – with massive wins”

Like the sound of Dead or Alive Slot? Try it out and bring them outlaws in. Our recommended casinos below not only offer this game on both desktop and mobile, but also the best casino bonuses online right now.

Where To Play Dead or Alive Slot