The idea of immortality may sound perfect to some or not so great to others, but in this Netent Slot it’ll help you find some serious riches so you can enjoy your mortal life in more luxury, riches and comfort!

Pyramid – Quest for Immortality Slot is a striking looking Netent Slot, which boasts lots and lots of extra features. Pyramid: Quest for Immortality is Netent's first Ancient Egyptian themed slot and boasts a 720 ways to win pay line structure, Avalanche Reels and frequent wins which are subject to a multiplier which can go up to x10!

How to Play Pyramid: The Quest for Immortality 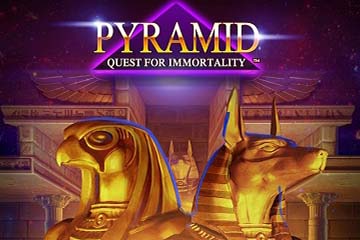 Pyramid: The Quest for Immortality slot you may think bares a resemblence to Netent's own Lost Island Slot in terms of colours used, but also Novomatic’s very popular Pharaoh theme: The Book of Ra Slot in terms of looks, design and theme. Pyramid: Quest for Immortality is designed with a really nice looking ancient Egypt theme, including ancient Egyptian icons, Cleopatra and Hieroglyphs and other symbols on the reels, and is set against a back drop of imposing Sphinx like statues at the top of the slot.

Pyramid: The Quest for Immortality’s soundtrack is subtle, but adds t the thrill of playing this high variance slot, quite nicely, hearing the thud of the the Avalanche reels falling and them exploding when you win something.

Pyramid: The Quest for Immortality is designed with 5 reels and rather interestingly reels which are in an odd looking format and has a 3x4x5x4x3 row structure, which offers a whopping 720 ways to win. You may recall that another one of Netent's slots also offers a more unique row structure, in a staggered format, which was Dazzle Me Slot!

Set Pyramid: The Quest for Immortality slot up so you’re playing within your preferred betting limits. You can play this slot from as little as £0.10 to a massive £200 a spin, so it’s perfect for all types of players no matter what levels you prefer! But, one word from us, it is considered a high variance slot, less frequent wins, but you'll get big wins when you win!

Pyramid Slot offers you a lot of entertaining and thrilling in game features to keep you in suspense whilst playing! Pyramid Quest for Immortality Slot uses Avalanche reels technology, which is the same as they first used in ultra popular slot Gonzo’s Quest. All this really means is that when you ‘spin’ he reels, the symbols will 'fall' into positions on the reels, instead of the traditional spinning action. When you get a winning combination once spun, the winning symbols will then explode and disappear, and will leave a space for new symbols to fall into that place, hopefully giving you more wins. This will continue until you get no more winning combinations, so it’s quite a nice feature as it's different to playing regular slots where the reels have the traditional spinning action.

Avalanche Feature: When you get a win, it will start the 'Avalanche Meter' which is located in the top right hand corner of the screen. When you reach three consecutive wins, a 2x multiplier will be applied. The multiplier will then increase one by one, for every three further successive avalanche wins you get, until it'll go up to a x10 multiplier!

Pyramid Wilds: The Wilds are something to look out for in this Pyramid Slot. If it appears at the top of reels 2, 3 or 4 and forms part of a winning combination, it will transform into a wild symbol for the next Avalanche! 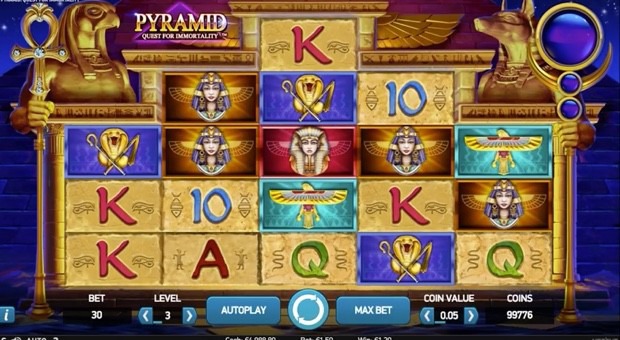 Pyramid Quest for Immortality can be played on most, if not all mobile phones and tablets with touch screens as it forms part of the Netent Touch™ range. Netent’s Touch™ slots are slots which are specially adapted so they respond to touch screens and are able to be played on smaller, mini devices.

Pyramid Quest for Immortality Mobile Slot looks good on mobile devices (we tried it on our iPad – our playing preference) as it does on the main desktop. There's nothing lacking, all the features are there as the main version, if anything, it's more simple to play in the Touch format - and this is what Netent Touch Slots are renowned for: easy usability.

Pyramid Quest for Immortality Slot is a great looking slot and offers lot's of entertaining features. We're quite suprised that it's NetEnt's first Egyptian Pharaoh themed slot! As we said, it it's quite similar to Novomatic’s Book of Ra Slot which is really popular in itself being taken from the offline casino floors and made into an online slot, but Netent has trumped everyone else again, by giving the good old fashioned classic slot a NetEnt makeover.

Pyramid: Quest for Immortality not only has avalanche reels, but it has this crazy reel design that goes against anything else we’ve seen before. Netent have produced a slot worthy of playing for long periods of time, where you’ll see big wins in this no so boring slot. Netent’s Pyramid Quest for Immortality Slot is definitely worth checking out at some of our recommended Netent Casinos below.